Royal Mail is celebrating this year’s Edinburgh Festival Fringe by issuing a very special postmark. This is the first time in the company’s 500 year history that a festival of this kind has been featured on a postmark.

The postmark will be applied to stamped UK mail from 07 to 31 August.

Local postman Stuart Millar and postwoman Katrina Coll had a sneak preview of the special postmark in Edinburgh today, along with Kath Mainland, chief executive of the Edinburgh Festival Fringe Society. 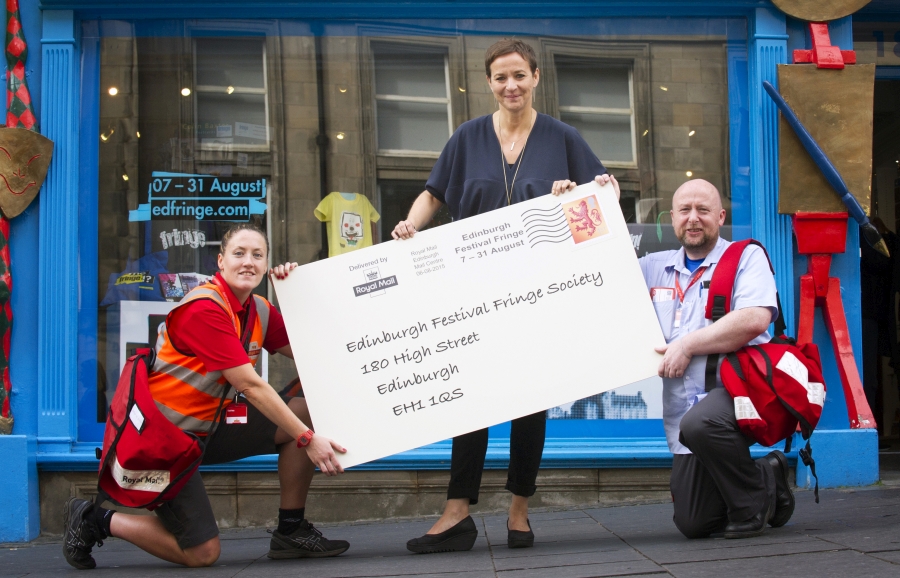 The Edinburgh Festival Fringe is the largest arts festival in the world and takes place every August for three weeks in Scotland’s capital city. 2015 will see 50,459 performances of 3,314 shows from 49 countries in 313 venues.

Royal Mail’s postmarks are reserved for special occasions and are used to recognise significant events, historical anniversaries or support of charity.

Andrew Hammond, Director of Stamps & Collectibles at Royal Mail, said: “Since it was started in 1947, the Edinburgh Festival Fringe has become an iconic event not only in Scotland but across the UK and the world and we wanted to pay tribute to that.

“We are delighted to be sharing the excitement of the event with the millions of customers that use Royal Mail every day.”

“Hundreds of thousands of people travel from across the UK and indeed from around the world to be a part of the explosion of creativity that is the Fringe and it’s fitting that our 2015 Fringe postmark will travel out across the world with every letter posted during August. It’s very exciting”.

Royal Mail plc is the parent company of Royal Mail Group Limited, the leading provider of postal and delivery services in the UK and the UK’s designated universal postal service provider. UK Parcels, International and Letters (“UKPIL”) comprises the company’s UK and international parcels and letters delivery businesses operating under the “Royal Mail” and “Parcelforce Worldwide” brands. Through the Royal Mail Core Network, the company delivers a one-price-goes-anywhere service on a range of parcels and letters products. Royal Mail has the capability to deliver to more than 29 million addresses in the UK, six days a week (excluding UK public holidays). Parcelforce Worldwide operates a separate UK network which collects and delivers express parcels. Royal Mail also owns General Logistics Systems (GLS) which operates one of the largest ground-based, deferred parcel delivery networks in Europe.