This is an archived April Fools' Day story.

There are plenty of unusual sights on the Royal Mile in August, but 2018 is likely to deliver a Fringe first in the shape of the Edinburgh Festival Fringe Society’s very own falconer.

Festival organisers have turned to the bird of prey in a bid to prevent pigeons disrupting the world-famous Fringe Street Events, supported by Virgin Money, which this year are celebrating their 20th year under the Society’s wing.

The decision follows a deluge of complaints from audience members and street performers alike, who have voiced concerns that the volume and behaviour of pigeons in the area is making the Royal Mile a less welcoming place to perform.

At the end of last year’s Fringe, performers staged a coup, insisting that the Society take action after more than 70 pigeon-related incidents were reported. A Facebook page, Pidg-Off, was set up by a group of disgruntled performers, encouraging people to share their negative encounters with pigeons at the Fringe.

Responding to mounting pressure, the Society have declared that the Royal Mile will effectively become a no-fly zone for pigeons in 2018, with the Fringe falcon just one of a host of measures designed to discourage pigeons from the area. 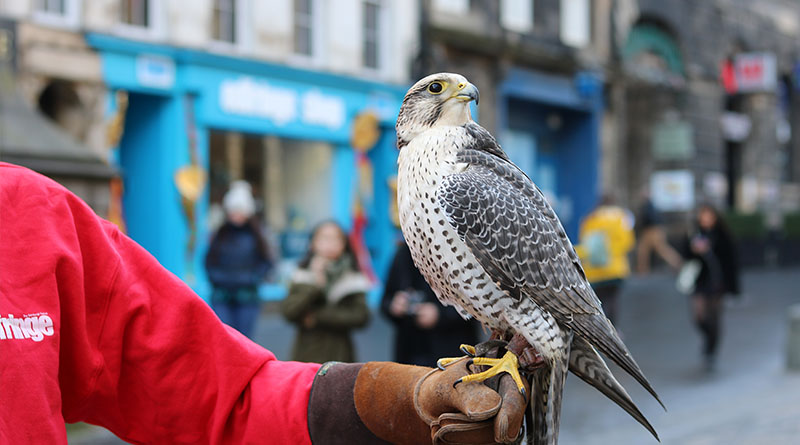 The move follows a successful pilot in London’s Trafalgar Square, where a seven-year-old Harris hawk named Harry successfully reduced pigeon numbers from 4,000 to just 120. The Fringe Falconer post is currently being advertised with a swift closing date of 10 April.

“The Fringe is an open access festival where everyone is welcome and anything goes, but we have been left with no choice but to make an exception for pigeons. The safety of our audiences and performers is always our primary concern and, following a number of complaints, we are implementing a new strategy to make the Royal Mile a pigeon-free zone by August 2018.

"We are confident that the measures we are putting in place will prevent any further disruption for the audiences and performers that flock to the Fringe each year.”

Street performer and founding member of the Pidg-Off pressure group, Albert Ross, shared his experience of the 2017 Fringe:

“I was in the middle of a difficult routine that involved juggling swords while riding a unicycle, when from nowhere a gang of four pigeons dove down and almost knocked me off my saddle. It was terrifying.

“A little bird told me about an incident involving a performer that balances a ladder on his chin as part of his routine; during the 2016 Fringe a pigeon literally pooped in his eye mid performance; he lost control and the ladder went flying. It was a miracle he wasn’t hurt.”

Other common complaints include pigeons roosting in market stalls, landing on human statues, and multiple reports of performers’ lunches being ravaged by the birds when left unattended.

Iona Boyd, an audience member who flew from New York to attend the Fringe, was horrified when a pigeon launched itself into her handbag in a brazen attempt to get hold of half a sandwich she was saving for her dinner.

“I was so excited to attend the Fringe, but the pigeon encounter really left a stain on my experience. We have all kinds of birds in America, but I’ve never seen any of them behave with such aggression. There was nothing that was going to stop that pigeon from getting what it wanted.

"I’m relieved to hear that the Fringe Society are taking action on this and I hope that it stops other visitors to the Fringe from having their day, or for that matter their dinner, ruined.”

The Fringe will be working closely with Edinburgh City Council’s Aerial Control unit to implement their Safe Working Overhead for Outdoor Performances strategy, further details of which will be announced in the coming months.

Find out more about the role of Fringe Falconer

So this story was a flight of fancy but if it put a smile on your face find out how you can join the flock.