Seven year old John Imray has been named as the winner of the 2015 Edinburgh Festival Fringe’s Schools Poster Competition, supported by Virgin Money.

The announcement was made by the Edinburgh Festival Fringe Society’s Chief Executive Kath M Mainland, Virgin Money’s Stephen Pearson and Edinburgh Artist Mark Kirkham at a special prize-giving ceremony and exhibition launch at the Museum of Childhood in Edinburgh.

A pupil from St Mary’s School in Melrose, Scottish Borders, John’s design was chosen from over 5,300 entries received from 171 schools across Scotland. His artwork will become the official poster for the 2015 Edinburgh Festival Fringe. His design was praised by judges for beautifully encapsulating the spirit of the Fringe. 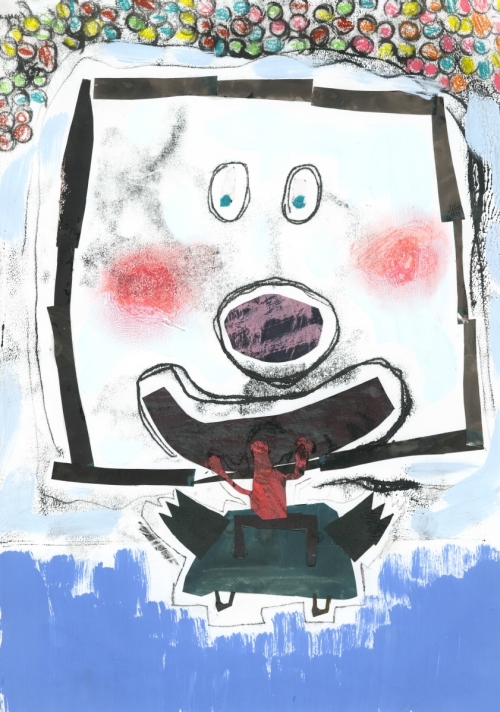 “John’s poster portrays the very essence of the Fringe – it’s full of life, colour and emotion. The judges unanimously recognised his skills and expressive ability. At just seven years old he’s a great example of the incredible artistic talent we have in Scotland. I’ve no doubt his family and everyone at St Mary’s School are bursting with pride.

“We’re extremely proud of our annual Schools Poster Competition – it’s embraced by a huge number of schools across Scotland and, now in its 35th year, continues to grow. We’d like to thank all of the schools who took part and all of the teachers who encourage their pupils to get involved with the Fringe and get creative in the classroom.”

Professional Artist Mark Kirkham - the Edinburgh Sketcher - was a special guest at today’s prize-giving ceremony and exhibition launch. He said:

“It’s an honour to be here. The Fringe’s Schools Poster Competition is a fantastic initiative and a great way to encourage children to pick up their paintbrushes and pencils. I believe creating art has a wide range of benefits – personally I find it relaxing and it allows me to completely switch off from the stresses of everyday life. It’s a beneficial and rewarding hobby for all ages.”

“Virgin Money is delighted to continue to support the Fringe’s Schools Poster Competition – it’s fantastic to see so many schools and pupils get involved and be creative.  We had more entries from more schools this year and the standard was incredibly high. However, John’s design really caught the eye of the judges and he was the stand out winner. He can be very proud to be named as the 2015 winner.”

The Fringe Schools Poster Competition supported by Virgin Money was launched in 1980 and is one of Scotland’s longest-running arts outreach projects. The competition has received over 100,000 entries since it was launched and is open to all five to sixteen year olds in schools across Scotland. Entrants are asked to create a poster design reflecting their interpretation of the Fringe. Schools are supported with comprehensive resources and lesson plans linked to the Curriculum for Excellence to get the most from the competition.

Every year, the winning design becomes the official poster for the Edinburgh Festival Fringe and is used on mugs, bags, t-shirts and other merchandise available to buy in the Fringe shop in the Royal Mile or via the Fringe website.

Runners up were eight year old Jack Glen from Addiewell Primary School in West Lothian and thirteen year old Isla Barlow from Perth Academy. Their posters, along with 14 regional winners', 67 shortlisted entries and John’s winning design are a part of a special exhibition at the Museum of Childhood now open until the 31 August. Entry is free of charge.