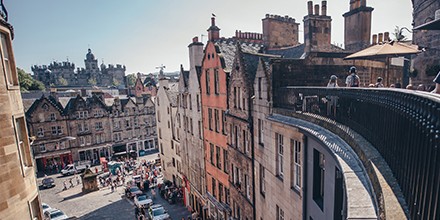 The perfect place for the Fringe

Edinburgh, Scotland’s capital city and, since 1947, home of the Edinburgh Festival Fringe.

Edinburgh provides a stunning backdrop for the Fringe, without which the festival would not be possible. Every August, venues and shows pop up in every nook and cranny of the city – inspired by the beautiful, historic and unusual spaces that Edinburgh affords

The hills are alive

Edinburgh’s compact size means that getting from venue to venue (there were 300 in 2017!) is often best done on foot.

Every year, the city’s hilly landscape offers an exceptional glutes and posterior workout for Fringe-goers, as they navigate their way around town. Comfy shoes are a must. And, if you’re keen for a more extreme vertical challenge, Arthur’s Seat, the majestic (extinct) volcano that protrudes from the city’s eastern skyline, is a popular climb with rewarding vistas of Edinburgh from its many vantage points.

The cobbled streets of Edinburgh’s historic Royal Mile run from Edinburgh Castle down to Holyrood Palace.

During the Fringe, the Mile is brought to life by the Virgin Money Street Events, the largest celebration of street performance in the world. Street performers and buskers travel from across the globe to perform at the Fringe, so be sure to pass by and enjoy a circle show, a song, or one of the dozens of Fringe show previews that take place here on a daily basis.

Wish you were beer

Edinburgh has an average of 22 pubs per square kilometre, ranging from ancient, cavernous music venues to secret speakeasys serving an impressive array of cocktails.

Many of Edinburgh’s watering holes host shows during the Fringe, and you’re never far from an enticing selection of pre/post show refreshments.

Edinburgh has a colourful and sometimes gruesome past, and the city’s narrow closes, underground vaults and supposedly haunted pubs provide delightfully spooky stages for Fringe shows.

As you weave through Edinburgh’s Old Town, keep your eyes peeled for intriguing close names, hidden pathways and ghostly goings on.

If you’re looking to catch your breath (and some fresh air) at the Fringe, Edinburgh’s many green spaces may be just the thing.

As well as the two street performances spaces on the Royal Mile and the Mound Precinct, many shows make use of the city’s great outdoors. In August, you’ll often find entertainment, as well as quiet spots away from the crowds, in Princes Street Gardens, the Royal Botanic Gardens and Duddingston Kirk Manse Gardens, nestled on the south side of Arthur’s Seat and overlooking the scenic Duddingston Loch.

A city so lit

As you’ve probably realised, you should never judge a Fringe venue by its cover, and what might appear to be a bookshop, library, or museum dedicated to writers can in fact be the setting for some fabulous Fringe stories. Top tip: for panoramic views over the city, ascend the Scott Monument, the world’s largest monument dedicated to a writer.