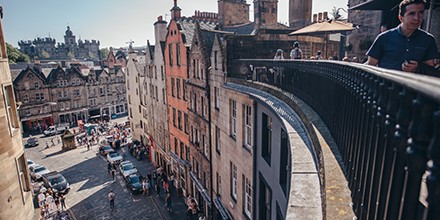 The Fringe is the worlds greatest celebration of arts and culture.

Edinburgh, Scotland’s capital city, is a historical city situated on the east coast of Scotland on the Firth of Forth. Edinburgh has been the Scottish capital since the 15th century. It has two distinct areas, both UNESCO listed World Heritage Sites: the Old Town, dominated by Edinburgh Castle, and the neoclassical New Town.

Home of the Scottish Parliament, Edinburgh is enriched with culture and literature, fine architecture, beautiful parks and galleries, including The National Gallery of Scotland, and has a small city centre that’s easily walkable. Well-known visitor attractions include Edinburgh Castle and the Palace of Holyrood House separated by the historical Royal Mile, the Royal Yacht Britannia, the Scott Monument, the National Museum of Scotland and the Royal Botanic Garden. With a population of almost 500,000, Edinburgh is Scotland's second largest city after Glasgow.

We know that the Fringe will leave you wanting more, but the journey to and from Edinburgh is part of the fun too. Whether travelling by rail or road, via the Highlands or the Borders, the landscape is spectacularly breathtaking.

Your travel to Edinburgh has an impact on the environment and flying from cities in the UK can take as long as travelling by train when you consider check-in times, why not consider coming by train or bus.

Waverley station (Edinburgh’s main railway station) is ideally positioned in the heart of the city, close to most festival destinations and the many bus routes servicing Princes Street (the main shopping street). For more information visit:

Be sure to plan your journeys now as cheaper advance tickets from many UK destinations go on sale 12 to 24 weeks in advance of travel.

The journey to Edinburgh is a scenic treat by either car or bus. Edinburgh is connected to the UK’s east coast via the A1(M); a short trip to Glasgow on the M8 connects you to most cities in the west via the M6 and the Lake District. Coach services run directly to Edinburgh from throughout Scotland and the rest of the UK. Start planning your journey:

The ultimate green initiative, car-sharing is one of the best options for travelling to Edinburgh. You save on costs while saving the planet, and get to know some of your fellow Fringe-goers en route.

Edinburgh International Airport is served by most domestic carriers and several international operators. The airport is easy to reach from the city, located just eight miles (12 km) west of Edinburgh city centre.

Edinburgh is a compact city and most venues are located within easy walking distance of each other. During August, the quickest way to get between venues can often be on foot. Some venues are within a stone’s throw of one another – particularly in the Old Town, where you wouldn’t need more than five to ten minutes to walk from the Royal Mile to many Old Town venues.

If you're looking for directions or more information on any of our venues, you can use our interactive venue map.

Edinburgh has plenty of cyclists, so if you’re thinking of bringing your bike along you will be in good company. But remember the city is quite hilly! The Fringe Programme map includes information on some useful routes. A more complete cycling map of Edinburgh can be found on innertubemap.com.

Edinburgh’s Lothian bus network is excellent, covering not just the city but also its outskirts including Queensferry, East Lothian and Midlothian; most venues have a bus stop near by.

Please note: unless you're using a Ridacard or the Lothian Bus M-Tickets App, you'll need to provide the exact fare on the bus, as drivers don't have access to cash to give change.

For more information on routes and timetables visit lothianbuses.com and download the Transport for Edinburgh App, for real time bus information and journey planning.

If you need any help you can visit any of Lothian’s Travelshop or tweet @on_lothianbuses.

Please note: you must buy your tram ticket before you board, via ticketing machines on the tram platform.

There are a variety of taxi ranks dotted around central Edinburgh. Look for the unmistakable black cabs: an orange light on top means the taxi is available for hire.

Edinburgh at festival time wouldn’t be Edinburgh without the athletic rickshaw drivers who cycle around the city. It’s a fun, unmissable experience – but remember to always agree the price of your fare in advance.

If you’re bringing your own car, please beware that Edinburgh has limited parking and strict restrictions in place. In the city centre the vast majority of parking is pay and display – always check the instructions on the meter and carry plenty of coins with you, or register with RingGo and pay over the phone or via app.

The safety of everyone at the Fringe is our number one priority, which is why we’re among several partners across the city working with Police Scotland’s Project Servator team.

Project Servator involves unpredictable, highly visible, intelligence-led police deployments that are designed to disrupt criminality, and can take place anywhere in and around the city. They use varying numbers of specially trained uniformed police officers who are supported by other police assets, including plain-clothed officers and police dogs. They’ll patrol with trained security staff. Some security measures, such as CCTV and vehicle checks, you’ll notice easily; others you won’t.

Fringe-goers have a vital role by remaining vigilant and reporting anything that doesn’t feel right. Tell a police officer immediately or call 101, the non-emergency number.

In an emergency, always dial 999. Don’t leave it to someone else to report it.

Find out more about Project Servator or follow @EdinburghPolice #ProjectServator.