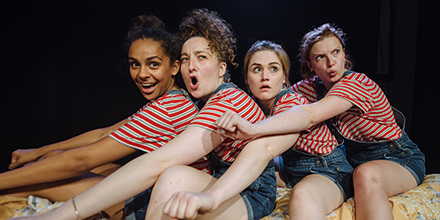 Every registered Fringe show must fill in a PPL PRS declaration form, whether it uses music or not.

This page will be updated once the PPL PRS Music Licensing Declaration form for Fringe 2023 is available.

If you don’t submit the online form but have indicated in your show registration that you may need a music licence, we’ll automatically deduct 4% of your box office takings from your payout to account for any undeclared use of licensed music.

Please note: this is the PPL PRS form for in-person shows only. Information on music licensing for online shows is included below.

Many factors can influence a show or venue’s potential need for a music licence. The information on this page describes the various licensing elements Fringe companies should be aware of.

Please note: this information applies only to music licensing at the Edinburgh Festival Fringe. Many elements apply outside the Fringe, but the arrangement we have in place with PPL PRS Ltd is specific to the Fringe. You shouldn’t apply this guidance to any events that are not registered with the Fringe Society.

Music licensing at the Fringe

Each year we negotiate an arrangement with PPL PRS Ltd, the UK’s music licensing organisation. The deal ensures all Fringe companies and venues are appropriately licensed for the events they’re hosting.

It also simplifies the music licensing process for Fringe companies and sets out a tariff of music licence fees. This tariff is at a reduced rate compared to the tariff you’d pay for the same events outside of the Fringe.

The deal is also a blanket licensing arrangement; this means no direct permission is required from any rightsholder for the use of musical compositions or recordings within the repertoire of PRS, PPL or any of their affiliate licensing bodies around the world.
We collect music licensing information via the PPL PRS declaration form.

This information helps us calculate any licence fees you need to pay to cover your show’s music use; we then automatically deduct this from your Fringe Box Office payout.

If you register an online show with us and indicate in your show registration form that a music licence may be needed, you will need to fill in a PPL PRS declaration form to confirm the details of the music that appears in your show.

This page will be updated when the PPL PRS declaration form for online shows in 2023 is available.

If you don’t submit this online form but have indicated in your show registration that you may need a music licence, we’ll automatically deduct 4% of your box office takings from your payout to account for any undeclared use of licensed music.

As with in-person shows, if you are using music that has been registered with PRS or a PRS-affiliated licensing body, then a PRS fee will likely be due. If the source of the music is a recording as opposed to an in-show performance, a PPL fee will also likely be due unless the recording is royalty free, out of copyright or has been created specifically for the show. The difference between PRS and PPL is explained in more detail below.

Please note, any in copyright music or recordings used in your show should be included in your declaration form. While incidental music and other forms of background music are covered by a venue licence for in-person shows, this music will need to declared and will factor into the PRS and/or PPL fee for online events.

For online shows that are not in the genre of music, the PRS fee is a variable rate which is proportionate to the ‘music density’ in your show. If you are using in copyright musical compositions for the entirety of the duration of your show, the PRS charge for this will be 15% of your ticket revenue. This top rate would only apply to a show that played in copyright music without any gaps for the entire duration of the show. For shows using less music, the 15% is reduced in proportion to the percentage of the duration of your show that features music. Some examples are below, using 1 hour as an example show length:

Tariff of PRS fees for online shows that took place at the 2022 Fringe.

* The duration of your show indicated in your show registration form will be used in these calculations.

Music shows – For music show which feature in copyright PRS registered music, a flat rate of 10% will be applied, in line with the Online Live Concert tariff operated by PRS. This will prevent the higher rate of 15% being applied. The variable rate will however still apply to classical music performances.

A minima of 3p per track/per ticket sold will apply to the above fees.

We appreciate these fees are higher than the equivalent fees for in-person shows. The fees are higher due to the incorporation of additional copyright aspects in an online space – namely the synchronisation and mechanical rights. The above rates where the most favourable for Fringe artists offered by PRS. If you have any concerns please let us know on [email protected].

The 2023 tariffs will be updated on this page once they have been confirmed. You can find the 2022 tariffs below for reference.

In 2022 we arranged a deal with PPL whereby the tariff of fees applying to in-person shows also applies to shows taking place online. The 2022 PPL fee structure is listed below.

The difference between PPL and PRS

In 2018 the Performing Rights Society for Music (PRS for Music, or PRS) and Phonographic Performance Limited (PPL) merged to form PPL PRS Ltd. Despite this merger, the two organisations still collect licence fees covering two different kinds of music rights. If you’re using music in your Fringe show, you may be required to pay a music licence fee to cover you for one, or both, of these licensing areas.

PRS fees relate to the use of musical compositions. These fees are distributed as royalties to composers who have registered their compositions with PRS or an affiliated performing rights organisation such as APRA in Australia or ASCAP in the US.

PPL fees relate to the use of specific musical recordings. These fees are distributed as royalties to the rightsholders of that recording, such as record labels and the musicians who played on the recording in question. As with PRS, PPL can collect fees on behalf of affiliate organisations around the world.

We’ve put together some examples that demonstrate where PRS and PPL fees apply and where they do not.

Scenario 1: A show features chart music that is danced to by the performers on stage. The music is being played through Spotify.

Scenario 3: A show features a sequence in which performers dance to a recording of a Beethoven piece. The recording was released recently and not made by anyone known to the company staging the show.

Scenario 4: A show features a recording of a Beyoncé song that has been made by a company member specifically for the show and is referenced on stage by a performer.

Scenario 5: A show features original music that was written and recorded specifically for the show.

When is a music licence not required?

In the following situations, a show would not need to pay a music licensing fee. However, even if your show’s music use falls under any of these categories, you’ll still need to fill in the declaration form.

Paying your PPL and PRS fees

When a show is required to pay a PRS and / or PPL fee, we calculate it using the information on the declaration form. We automatically deduct these fees from a show’s Fringe Box Office payout.

We calculate the PRS fee as a percentage of total ticket sales. This means that, if you’ve been selling tickets directly or through your venue, we’ll be in touch with you or your venue to confirm details of all sales made outside the Fringe Box Office, so we can ensure the fee is accurate. If you don’t submit a PRS declaration form but have indicated during registration that you may require a PRS licence, you’ll be charged a default fee at the highest rate (see tariff, below). If you or your venue don’t supply sales information, we’ll calculate fees on the assumption that all tickets not available through the Fringe Box Office have been sold.

Tariff of PRS fees for in-person shows that took place at the 2022 Fringe.

Tariff of PPL fees for in-person shows that took place at the 2022 Fringe.

Please get in touch with [email protected] if you have any specific questions about the information on this page. A member of our team can set up a 10-minute slot to talk things over with you on the phone or on a video call.